By entering this website you accept the use of cookies. More information
OK
Sport Nutrition | Get your Nutrition right !
Les bienfaits de l'ashwagandha

Ashwagandha is a medicinal plant that has been used for thousands of years for its numerous virtues.
It is mainly used to strengthen the immune system of sick, weakened or elderly people, but also to regain mental balance and contribute to vitality.
Ashwagandha has the particularity of being an adaptogen plant, which means that it has the capacity to adapt to the specific needs of each person, and in particular to the various stresses undergone by the body, whatever their origin.

Among the main components of ashwagandha, we find :

The active ingredient responsible for the anti-cancer effect of ashwagandha is witaferin A. According to some studies, this molecule would have the capacity to inhibit the activity of a 56KDA protein which favors the development of cancer cells and metastasis.

This action of ashwagandha on memory and cognitive abilities would be linked to its content of tannins and flavonoids, which protect brain cells from free radicals attack.

A study conducted in 20174 by the Indian Red Cross and the NSHM Knowledge Campus in Calcutta, for example, showed that ashwagandha could be "effective in improving immediate and general memory in people with MCI mild cognitive impairment as well as improving executive function, attention and information processing speed."

Ashwagandha is said to be an effective natural anxiolytic to help combat stress, depression, anxiety and therefore insomnia. It is tryptophan, an amino acid precursor of serotonin, the so-called "happiness" hormone, which is said to confer the well-being and soothing effect of ashwagandha.
A study dating from 20005 confirms the anxiolytic effects of ashwagandha. Another study conducted in 20126 suggests "that a full-spectrum ashwagandha root extract in high concentration safely and effectively improves an individual's resistance to stress and thus improves self-rated quality of life".

Ashwagandha would also reduce hyperglycemia by improving the insulin sensitivity index. This is the conclusion reached by this Indian study, conducted at Hamdard University7.

One of the reasons why this plant is used in Ayurvedic medicine is its anti-inflammatory effect. Indeed, the plant helps to prevent and fight against joint diseases, such as rheumatism or arthritis. In a way, the consumption of this plant allows to reduce the inflammatory pains. These anti-inflammatory properties are also interesting in the context of cardiovascular problems.

Ashwagandha is also known worldwide for its outstanding antioxidant properties. By improving the elimination of free radicals in the body, it helps to counter cellular aging, but not only. The Indian plant also helps prevent various diseases such as cancer and cardiovascular diseases. Ashwagandha is considered a natural anti-aging remedy because of its benefits on cell aging. In some regions, it is even presented as a plant of "longevity" and youth!

Ashwagandha is often presented as a natural and particularly powerful aphrodisiac. Its adaptogenic properties are not foreign to it, since they allow to reduce the effects of stress on the body. The latter are very often at the origin of sexual disorders or dysfunctions. Clinical studies carried out so far have demonstrated the anti-stress effect of the plant on patients. But in these cases, the plant has also improved their sexual activity (6). Of course, Indian ginseng should not be taken in too high doses. Indeed, in case of excess, its consumption can have the opposite effect of that sought, and thus affect the libido (7). Finally, the plant also seems to improve the quality and the quality of spermatozoids in men who consume it. 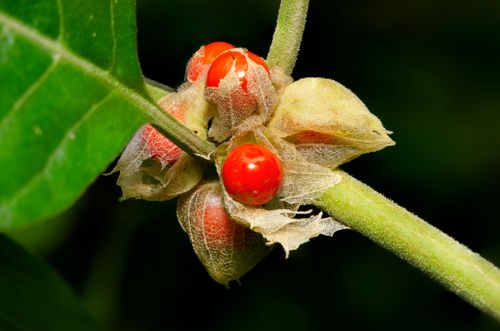 Ashwagandha is a plant that many sportsmen use, and which is authorized in competition. In fact, it is often considered one of the best for improving the sports performance of athletes who mobilize both their explosiveness and their strength. Moreover, the plant is also effective, to a lesser extent, on the endurance and the long efforts. The effectiveness of the plant is such as it raises some debates, in particular with regard to the sporting competitions. However, many amateur and professional athletes are still unaware of this plant's many health and physical performance benefits.

Ashwagandha taken as a supplement helps to improve the strength of those who consume it. These effects can be observed in both athletes and sedentary people. In addition, supplementation helps to improve intermittent sprint performance, both for people who train and for those who do not practice sports on a daily basis. Finally, ashwagandha supplementation increases testosterone production in people with low testosterone levels as well as those who are on strength training programs.
Scientific studies have proven that this plant improves strength and helps increase muscle mass in people who practice strength training (or bodybuilding). The results are significant and confirm that the use of the plant is useful and beneficial in a sports context.
Ashwagandha as a dietary supplement also helps to improve balance, power, maximum velocity, and maximum oxygen consumption of athletes. It is the same for the muscular strength of the back, legs and hands.

The effects of ashwagandha on athletic performance are primarily for short, intense efforts. However, the elements which we have to date also allow us to underline its effectiveness in the sporting performance during the efforts of long duration (of aerobic type). Similarly, the plant has a beneficial effect on the maximum capacity of oxygen consumption: VO2MAX. Regarding this capacity, it allows a slight improvement.
In addition, ashwagandha-based supplementation helps to postpone the reaching of exhaustion during long efforts. In other words, the plant contributes to improve the endurance. It acts as such on the cardiovascular endurance. Athletes who follow a cure of this plant can thus improve their cardiorespiratory endurance.

Side effects of ashwagandha

Consumption of ashwagandha can, in some cases, lead to the appearance of symptoms, also called "side effects". Although relatively harmless, they should be taken into consideration. At high doses, this Indian plant can cause various intestinal disorders: diarrhea, constipation, etc. It is therefore important to start a cure of ashwagandha with reduced doses, and to increase them over the weeks. At the recommended doses, it is not dangerous.

Contraindications to its consumption

The presence of alkaloids in the composition of ashwagandha makes it a plant not recommended for pregnant and breastfeeding women. In India, pregnant and breastfeeding women sometimes use it, but always at very low doses. When in doubt, it is better to avoid it. On the other hand, ashwagandha is often not recommended for people with intestinal disorders, hyperthyroidism or hemochromatosis. Finally, people who are taking antidepressants should also ask their doctor's advice before starting a course of ashwagandha or any other plant. If in doubt, follow your doctor's advice.

Ashwagandha is a powerful plant that should be used and consumed sparingly. Don't hesitate to ask for advice from a consultant in the store to find the most suitable dosage of ashwagandha. And so, enjoy the benefits of the plant without experiencing side effects!

Here’s what we've been up to recently.